PLINTH FOR STATUE OF EBENEZER HOWARD

In 2019, I was commissioned by the Welwyn Garden City Centenary Foundation to carve three rings of lettering on a Welsh slate plinth. Standing on the plinth, is a 2.2 metre tall bronze statue of Ebenezer Howard, made by the Hertfordshire based sculptor Ben Twiston Davies. Commissioned to commemorate the 100th anniversary of the founding of the town, Ben's concept was to emphasise Howard's commitment to peaceful progress. Ben chose words from William Blake's Jerusalem as they spoke to the energy and drive of Howard.

I began design work on the plinth in mid-2019 and carving was due to start in the spring of 2020. However, the COVID-19 pandemic delayed the project and carving took place between October 2020 and February 2021 at both Parndon Mill at Ben's studio. The statue and plinth were installed over 3 days from 14th - 16th April 202. Below are some photos of the work in progress and the completed statue and plinth. 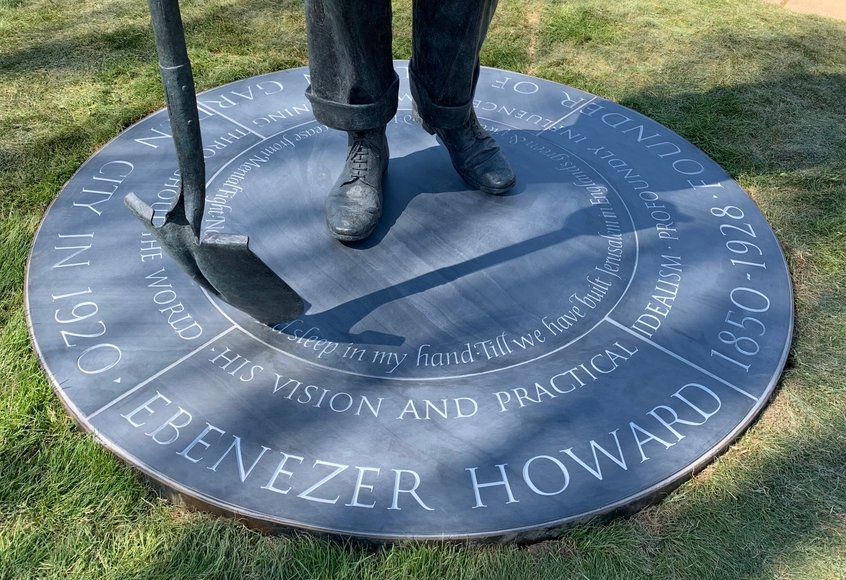 Drawing for inner circle of lettering.

Checking the layout of the lettering.

Lettering ready to be transferred to the slate.

Carving in progress of the first outer section of slate.

Letters cut in slate situated outside need painting as the contrast of the cut surface disapears when it gets wet.

Carved outer sections, washed down and placed around central section.

Carved outer sections of slate laid out in Ben's studio.

Inner circle of lettering ready to be transfered to the slate.

Inner section of slate in progress.

Inner section of slate in progress.

Roman caps painted and rubbed back

Statue being installed on plinth by MTEC of ware

was commissioned by the Welwyn Garden City Centenary Foundation to mark the 100th anniversary of the town in 1920 by Ebenzer Howard.

Huge thanks are due to the tireless work of the Foundation, to Burgess's of Hatfield for supplying the slate and to MTEC of Ware for installing the plinth and statue.